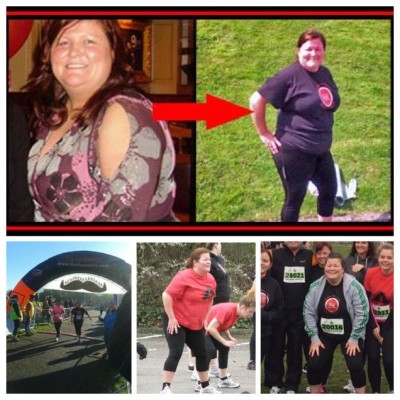 Mandy is another client I have been coaching close to 3 years.

I have so much respect for this lady because for the last 3 years she has had various injuries, her knees have given her problems but she never uses this as an excuse and always turns up and does her best.

For the first couple of years Mandy was superb, the inches were melting away, she was on it with her food and also had medals around her neck through smashing events such as the 5k Major Series and the Heaton Park 5k run.

However, the last 6 months has not been great as she's been very busy with work which has had an impact on her attendance and standards have dropped.

I think Mandy has given herself a kick up the bum because for the past 4 weeks she looks like the Mandy of old. I am seeing lots of Mandy at the sessions, the inches are starting to melt away and she now has a goal by booking herself on the 10k Major Series which takes place in Leeds in 2 weeks.

Mandy is like family and I really hope this is the kickstart for a fantastic 2016.

This website uses cookies to improve your experience while you navigate through the website. Out of these, the cookies that are categorized as necessary are stored on your browser as they are essential for the working of basic functionalities of the website. We also use third-party cookies that help us analyze and understand how you use this website. These cookies will be stored in your browser only with your consent. You also have the option to opt-out of these cookies. But opting out of some of these cookies may affect your browsing experience.
Necessary Always Enabled

Any cookies that may not be particularly necessary for the website to function and is used specifically to collect user personal data via analytics, ads, other embedded contents are termed as non-necessary cookies. It is mandatory to procure user consent prior to running these cookies on your website.